Some of you have heard part of this before. Several years ago my son asked if he could go hiking with a friend. He also wanted to take along his dog, Arwen, who was not yet full-grown. My response was yes, with the qualifier that they could not go up the Lookout Point trail because it was too steep for Arwen at her age. 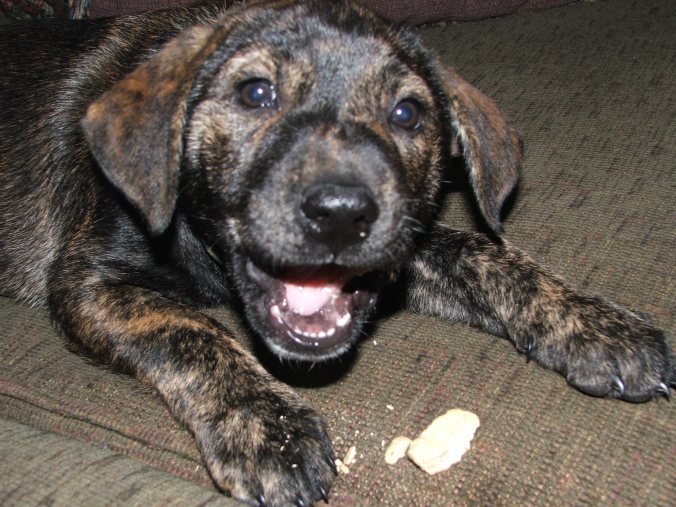 Still my favorite photo of Arwen

So of course, being young and immortal, that’s exactly where they went. And they also went bushwhacking off trail. Along the way Arwen ended up stuck on a boulder outcropping. Both us mothers filled out backpacks with equipment but it quickly became obvious that a rescue attempt would be dangerous.

To make a long story short, we spent a horrible, sleepless night, imagining Arwen out there alone. With the sunrise though, rock climbers and friends gathered and she was rescued.

The boys of course were grounded.

The fellow-mother came up with a great idea afterward when we were calmer. She asked each of us to write our version of what happened. It was wonderful to see the same drama from different points of view and to see what each of us found important enough to record.

My son wrote his in story form. I was thrilled. A writer was born!

Until a couple of years ago when he asked me a question about a specific piece of writing craft. I tried not to scare him off with my excitement. I simply sent him home with this GIANT three-ring binder full of resources on craft.

Last night he asked me to edit something he’d written on world-building for a science fiction piece he’s working on.

I calmly assured him I’d be more than happy to give him an honest opinion.

I managed to wait until he pulled out of the driveway before celebrating. I think I had the piece edited and sent off before he got home.

There’s a fine line between supporting him and pushing something on him that he may not want. Or overwhelming him.

But I keep going back to that story he wrote when Arwen was lost in the woods. Little does he know I still have it. Maybe some day I’ll point to it and say ‘this was the beginning’.

7 thoughts on “Lost Dogs and Writing”