My son turns eighteen in a couple of days and is leaning hungrily toward independence. Since he’d be absolutely mortified if I gave him the following quote personally, I’m going to place it here, along with a link, in a public place he’ll never see.  The following is from an old folk tune called Sleep Song. One link at the end is a song from Kitaro, that was birth music when he was born. As laid back as this kid is, we should have started the bagpipes (Tannahill Weavers) sooner in the birth process, but if you have time, Oasis is a beautiful piece of music. The second link is the Sleep Song. As always, lyrics lose in translation without the music to transport the words, but you get the idea.

Thanks friends, for giving me a moment to be soppy and sappy.

Way out of my reach. Telephoto and sign of times to come.

Please bear with me because some of you know bits of this story and experienced it first hand.

After my Irish Wolfhound/dog soul mate, Strider, died of bone cancer, my son talked me into letting him adopt a puppy. He had to do a lot of talking. On top of all the emotional aspects, this pup was barely seven weeks old and a mix of pit bull, lab, spitz, and I’m sure a bit of ketchup brand thrown in.

The animal shelter insisted on spaying her before we could take her home. It didn’t matter that I promised we’d do it  and I can understand as I’m sure they’ve heard that line before. But I was concerned about hormonal imbalance, the higher risk of cancer she would be exposed to, etc. She was spayed at seven weeks anyway, and we brought her home.

One way she accomplished this was by getting stuck on a huge boulder on the granite face of an area rock climbers habituate. It was dark, cold, and pouring rain, and since her exact location wasn’t known, it was determined to be too dangerous to find her.

Picture this. Me, sitting on a wet log along side a steep, narrow, hiking trail. Moss covered trees hang over me, a friend’s dog is shivering, soaked and plastered against my side. It’s almost dark. Every so often my friend’s dog would bark. And there would come back this faint, echoing answer from this dog I didn’t want and told myself I didn’t even like. We called off the search knowing she was out there alone except for bears and cougars and coyotes…

The next morning as soon as it was light lots of people showed up to help. Some had climbing gear, some hiked, and she was found still sitting on the boulder waiting. They said she was smart to know we were coming for her. I said she was too stupid to self-rescue and Strider would have known what to do.

Okay, so a few years have passed. This weekend I was scratching her tummy (she has a way of forcing a person to do her will) and found a lump under one of her tiny, undeveloped nipples. It’s about the size of the ball of my thumb. It doesn’t seem to hurt her when it’s touched, but it clearly doesn’t belong there.

The part of me that swears I don’t like her is saying wait a week or so and see what happens. But somehow, over the years, that part of me seems to be shrinking. Now there’s a bigger part shouting to rush her to the vet even though it’s at night and there would be emergency fees.

I really need to figure out how she works these mind control tricks. 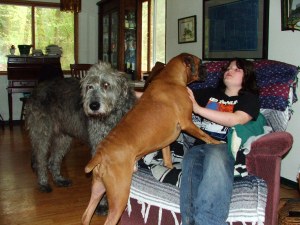