I used to say ‘dang it’, ‘darn it’, and ‘shoot’. My husband asked me why I didn’t just say the swear words. He pointed out that I said the words with the same emphasis, for the same reason, and with the same meaning, as the actual swear word. But I couldn’t do it. I’m not sure why. A word is just a word, right? Well, that’a stupid question to ask a writer who knows the value of each and every word.

Years ago my mother decided she swore too much and switched to flower names. Not too long after, she was caught with a swear word passing her lips. My father said, ‘what happened to ‘petunia’? My mother responded, very firmly, that sometimes petunia just didn’t do the job.

I understand that a bit more now. During all the radiation fallout a few years ago, my emotions were erupting. My doctor told me if I wanted to cry, to cry. If I wanted to scream, to scream. So I did. Well, maybe not screaming. But I slammed doors and started cussing.

So a few years ago I pitched a story idea to an agent. During the pitch, he asked if there were swear words in the story. One character did cuss. He told me if accepted, I’d have to change that. His readers expected books with no profanity. I passed on the agent. Swearing was part of the character. Plus, that personality trait served to emphasize the protagonist’s opposite traits of tentativeness, dominated by a parent, and naive about life. (Rachel and Cody for those who have read The Memory Keeper). I decided Rachel was a cussing kind of girl and needed to stay that way.

Swear words also seem to be a cultural thing. Back in the early 20th century, it would have been hard to find books with swear words. Books reflected the times, and you didn’t hear cussing very often on radio shows or television. Whether you think it’s a good change or not, swearing is commonplace now, and art forms reflect that cultural change. Though some swear words are more socially acceptable than others.

It makes me wonder what people think of swearing, in the books they read.

Finally, I just have to say that this evening  I was outside in the dark and rain, with my head lamp as the only light, chasing two ducks named Larry and Curly, in circles around the coop, slipping in mud and duck-do. Shouting out ‘you f***ing birds!’ at the top of my lungs felt a lot better than if I’d said, ‘dang it, you stupid birds, why can’t you figure out the ramp like Mo does?’

I swear. Doubt that makes me a better person, but it lowers the blood pressure. And I’m keeping the character of Rachel and her cussing around for the sequel. 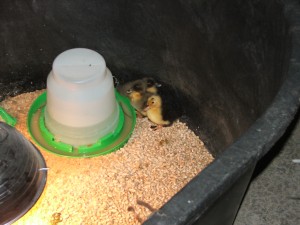 Larry, Mo, and Curly before they started leading me on the merry coop chase.