No idea why the last post has such oddball font.

Last night at the writer’s group I attend, I asked the others what story scared them so much that it has stayed with them. It started an interesting discussion that I wanted to continue here.

We listed those stories that still scare us, like ‘Salem’s Lot’ by Stephen King (he made it so believable), ‘The Tell-Tale Heart’ by Edgar Allen Poe, (the rhythm of the heartbeat in the words), ‘The Haunting of Hill House’ by Shirley Jackson (as Stephen King has said, she can terrorize without yelling).

What was interesting was that none of the stories that scared us and still haunt us, had anything to do with blood and gore, but with pacing, tension, word use, the slow escalation, the unexpected. By unexpected I don’t mean the creature under the bed. If you’ve read Shirley Jackson’s book there’s a scene with a terrified young woman holding tight to her friend’s hand in a dark bedroom while something pounds on the door. The reader is directed to that ghostly terror outside the room trying to get in, until the light comes back on and the totally unexpected, totally creepy part, is inside the room. It’s a great example of directing the reader’s attention unobtrusively in one direction, while the author sneaks up behind the reader.

Of course you’d expect writers to focus on the craft of the scary story, but I think they have pinpointed what scares us  in these kinds of books, whether you’re a writer or not. A character to care about. That niggling faint feeling that something is about to happen, the sense of doom rushing toward you.

In all fiction though, there are moments in our stories where we need to accomplish the same thing. Tiny moments of pushing our reader to the edge of the seat, whether that’s in a romance, a western, or a mystery. I think we could learn how to make those tiny pieces of our plots more breathless by studying the structure of those scary masterpieces.

Besides, Halloween is coming. It’s time for me to dust off Shirley Jackson’s book and read it again.

Oh, and by the way, photos can be terrifying, too…for a parent! 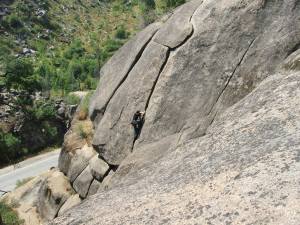