I’ve wanted to spin for years. Originally it was because I was fascinated by art forms that historically were necessities for life, and that seemed to be dying out. Like spinning, taking wool, and turning it into cloth.

That’s why I learned how to do bobbin lace, which I’ve posted about before. But as much as I enjoy making lace the slow way, lace isn’t essential to life.

So I should be able to spin. There’s material out there to forage if you don’t have handy sheep. You can spin fireweed, cattail, rabbit fur. Heck, you can spin dog hair. If the world fell apart, I could put warm doggie-smelling sweaters around my family.

If I could spin, that is.

Years ago, my husband built me an Ashford spinning wheel. I worked that wheel for months. But I just could not get the wool to draw onto the wheel. For something that was supposed to be rhythmic and soothing, all it did was make me cuss and throw things.

I finally gave up and told my husband I couldn’t figure it out and would never be a spinner. I think there were some tears involved.

That’s when he said the problem was the footman, a piece that connects the foot paddle to the drive wheel. He’d had problems with it when putting the kit together and used a hammer. 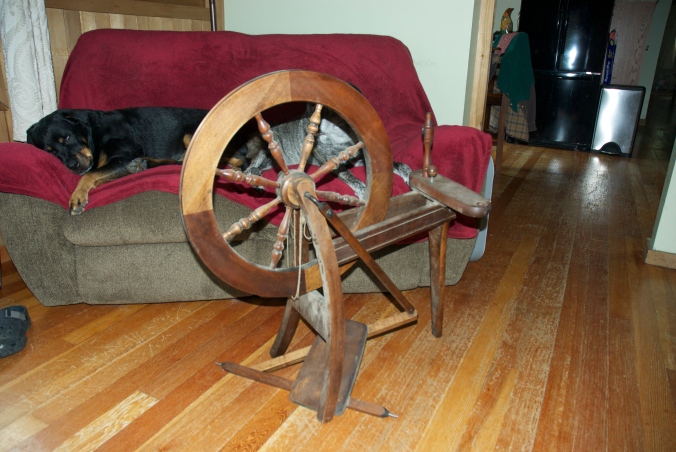 The bottom half isn’t supposed to look like that.

That was great news. It wasn’t me. A friend then gave me an Ashford castle wheel and I knew I was finally going to spin usable wool.

I had wool to practice on. 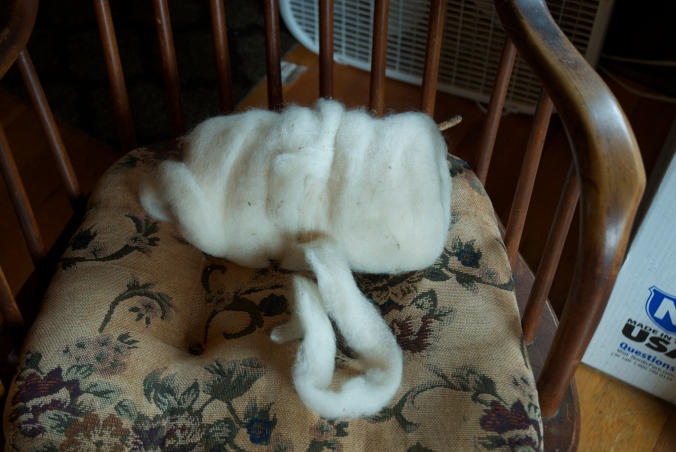 I had my dream project wool, in heather colors.

And nothing worked. The wheel eventually made its way to the attic, and the wheel my husband built made its way to a dark corner, where I’m sure it broods and thinks unkind thoughts about hammers.

For Christmas this year, my husband got me a spinning wheel maintenance kit, and pulled the castle wheel out of the attic. I pulled out the dusty books. Start Spinning, The Intentional Spinner (a holistic approach to making yarn), and Hands On Spinning. And of course, since those early days, there are now YouTube videos.

I also found the results of my first attempts. It’s hard to tell from the photo, but the wool on the bobbin, and the ball, can’t be used for much. Well, the kitten is now playing with them, so I guess they’re usable.

I spent today with beeswax and cloth, oiling the dry wood. I paged through the books, struggling to remember the language of spinning. The mother of all, the maidens, the flywheel, the tension springs and bobbins, the drive band and brake band. Just the ancient names make me itch to treadle that wheel and try again.

The con rod joint is broken so the treadle isn’t connected to the arm, but that will be fixed shortly

There’s even a very old folk song for the rhythm of the spinning wheel:

Merrily cheerily noiselessly whirring/ Spins the wheel, rings the wheel while the foot’s stirring/ Sprightly and lightly and merrily ringing/ Sounds the sweet voice of the young maiden singing.

And guess what I learned today? In going through the books, I finally figured out that my castle wheel is a double drive wheel. Which means when I struggled with it years ago, I had the drive band on wrong because I thought it was a single drive wheel. Honestly, I didn’t even know the difference.

The mother of all, with her upright maidens , tension knob, and the fly wheel in the middle

So maybe this time it will work.

In the meantime I’m going to practice treadling to the very old song and hope I might be able to create something for those I love.

And I’m going to daydream about the stories, the women down through time connected by wool and wheels.